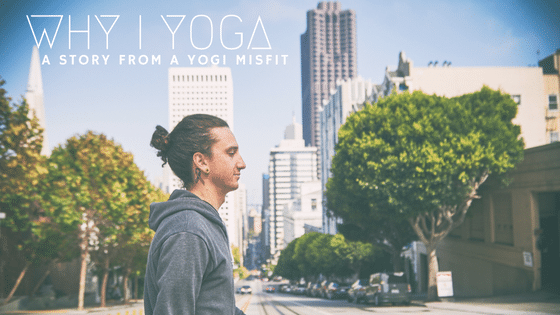 When I was 18 years old and living in San Diego, the concept of yoga was 100% new to me. I lived with a roommate who had been a very avid Ashtanga yoga practitioner. She invited me to go to a class and I said no the first couple of times. It wasn’t until after I was told that my surfing and running would benefit from this that I decided to give it a shot. Following my first class, I could hardly walk the next couple of days and had to take some time to recover. What the hell had I just done?  I stuck with it and went back every other week or so to bond with my roommate and I realized I liked the people that went. Plus, my other surfer friends were really into yoga and it gave us another thing to talk about in the water while waiting for waves (bruh).

Fast forward a few years and I had stopped doing yoga after those initial few months. This was mainly because I was busy drinking and partying and getting caught up in my downward spiral. There had been a few life events that really shook me up, but the idea of actually dealing with my emotions at that time was overwhelming, so I did what I did best and hid them. I hit one of the scariest points in life where I was verging on really hurting myself or someone around me.

My roommate at the time was my guardian angel. She knew I was in a ton of pain and that I didn’t know how to deal with it. She also saw that there was no way I was going to talk to anyone about how I was feeling. She told me I had to do something because she couldn’t see me continue to live my life in the way that I was.  She mentioned that this new yoga studio had opened up a couple of blocks away from our house and, knowing that I had dabbled in the past, suggested that maybe I should try going. I knew she was right and that I had to change something, so I walked into the studio the very next day and gave it a try.

I didn’t really love it at first, but I knew I had to stick with it or I’d have to move out of my sweet apartment or disappoint my roommate and friend.  I stuck to the original teacher’s classes because I thought she was pretty cool.  It took some time, but I started to value the benefits of regularly attending yoga classes (besides still having a place to live).  A few months later, my work closed businesses and I had to cut finances. I mentioned it to the teacher who had become my friend and she quickly offered a solution: I could clean toilets in exchange for free yoga. So I did, and let me tell you I cleaned those toilets damn good!

Let’s fast forward again to today.  I’m a full-time yoga teacher and loving it more than ever. Yoga for me was never about how many tricks I could do, but rather about what kind of connections I could make with others. I persevered with my yoga efforts because of the amazing support of the community I had built.  The adversity I had faced in the past obviously didn’t matter to these people. They just supported unquestioningly. It inspired me to do the same.

I continue to be taken aback on a regular basis at how the yoga community can really come together for each other or for a cause. I know I wouldn’t have made it this far in my own personal journey without this support.  In turn, I now have the means and motivation to help others.  I recently teamed up with a teacher friend from San Diego on this cool project called One Love, which raises money for local youth as well as youth in a shelter in India.  I helped organize and teach a donation-based yoga class where 100% of the money collected from students was donated to the Orlando One Fund to help families of victims in the Orlando shootings earlier this year.  On Saturday, October 29th, my good friend and fellow yoga instructor Jacqui Rowley and I are putting on the Howl I Scream event to raise money for our four-legged friends at the local SPCA.  On Saturday, November 19th, the staff at Yoga Tree Castro in San Francisco and I are hosting a food drive and yoga class to help those in need in the community have a happier holiday season.  I continue to look for ways that I can utilize yoga to give back and help those in need in just the same way that the yoga community was there for me when I was in need. This pursuit is where I feel I get my light from. It fills my cup. I believe strongly that it’s part of my work in this world, and I’m hooked.  THIS… is why I yoga.